About Us - Museum History

The Museum first started as a collection of Battle of Britain relics by our late founder Mike Llewellyn. As a child, he and his brother Ralph used to play on the old airfield at Gravesend and his love of collecting bits of the old 'planes started at this early age. He was also inspired by both his mother, who told him stories of life during the war, and his father, one of the PLA's (Port of London Authority) last helmet divers, who found the wreck of a crashed aircraft at Allhallows in the Thames Estuary. After investigating the crash it became evident to Mike that the remains of crashed Battle of Britain aircraft were still there to be found. At first he was accompanied by two or three fellow enthusiasts, none of whom envisaged the creation of a museum, they were just indulging in a fascinating hobby which took them all over Kent at the weekends; but, as time went by, and the team grew larger, they were asked to set up exhibits at various venues including the premier of the film "The Battle of Britain" in Gravesend and the late Biggin Hill Battle of Britain Airshow.

Eventually, in 1971, our first museum opened in a chicken battery house in the garden of ex-Battle of Britain pilot Brian Hitchin, in Langley. A couple of years later Lord Masserene invited us to open it at Chilham Castle and seven or eight years after that it moved to Hawkinge airfield. The museum site, which was first opened to the public in 1982, was rented for some years until Mike had the chance to buy the land and, making himself homeless by selling his house to raise the money, he moved into an old caravan amongst the crumbling remains of the old MOD buildings; the rest is history.

Today, the Kent Battle of Britain Museum Trust, the largest private museum in the world dedicated to the heroes of 1940, stands as an inspiring memorial to Mike's drive and dedication, for which he was justly awarded with the MBE in 2002. Upon Mike's death in 2013, David Brocklehurst (who, incidentally, was also awarded the MBE in that year) and who had first joined the Museum in 1979, becoming Chairman in 1990, took over Mike's role and responsibilities, and in the ensuing time the museum has continued to thrive and prosper, seeing its' team of volunteers grow from an original number of about six to some forty two dedicated volunteers who continue to keep alive the memory of both the Few and their vital role in the protection of the British Isles and of Mike Llewellyn, his lifelong deep respect for those who took part in the Battle of Britain and his creation of a museum dedicated to their memory.

The museum's reputation has also grown over the years and around the world, and thus we now see visitors not only from our close neighbours such as France, Spain, Germany, Belgium and the Netherlands etc. , but also from countries, such as Brazil, Mexico, Alaska, Lithuania, the Czech Republic, Slovenia, Russia and many others, not forgetting the USA, Canada, Australia and New Zealand.

This growth has, however, taken us to a point where our plans for the future mean that we must acquire more land for additional buildings for more displays, an education centre, a research centre etc. so that we can continue to bring the epic story of the vital and dramatic events of the Battle of Britain to an ever expanding worldwide audience.

In July, 2020 the Museum commenced its most ambitious project to date - the commissioning of seven life-size sculptures of Allied Battle of Britain pilots, based upon an original photograph taken at RAF Hawkinge on 29 July 1940. This sculpture will be unveiled on 29 July 2022, the 82nd anniversary of the original photograph, and will be located in front of the museum's three Hawker Hurricane aircraft - about 100 mtrs from where the original photograph was taken. This project will cost £150,000 of which, as of 30 September 2021, some £54,000 has already been raised from donations from around the world. 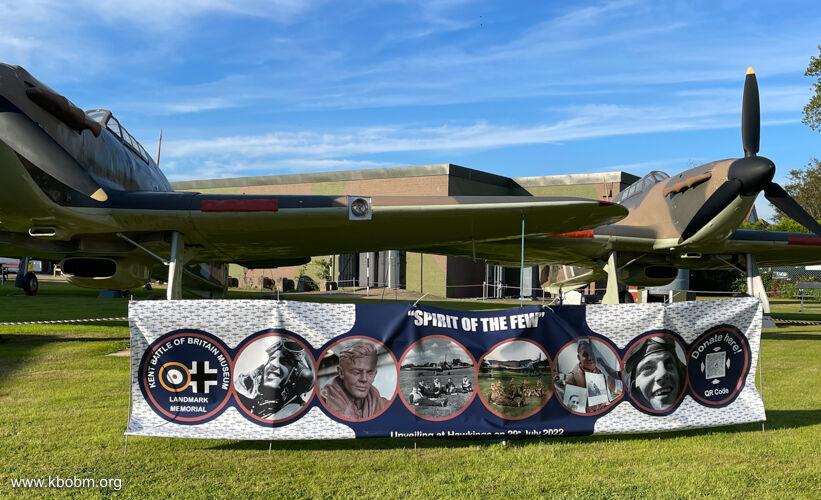 More information on this project here.