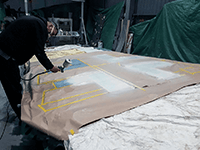 We, the Kent Battle of Britain Museum Trust at Hawkinge, have spent many years looking for a Heinkel He 111H / CASA 2.111.B project and when we heard that the Imperial War Museum's project might become available, we also listened to the rumours that she was completely stripped out in side (to lighten her for the airlift), was full of corrosion (as she had been a gate guardian in Spain for nearly thirty years) and was built as a CASA 2.111.B.

So you can imagine the surprise when Dave, Richard, Julian and Jim, four volunteers from the Museum, inspected the project at Duxford earlier this summer and discovered that many of her instruments, controls, control column, rudder bar pedals etc were still insitu. The corrosion was fairly localised and can be inhibited, controlled, patched and replaced, as and where necessary. More importantly we believe she was built in the early 1940's as a Heinkel He 111H-16 and later converted, including her engines to a CASA 2.111.B.

Since acquiring the project the volunteers, lead as always by Dave, have been busy planning, in conjunction with the Imperial War Museum, to move the Heinkel to Hawkinge in mid to late November.

We have also been busy tracking down spare parts for her long-term restoration. So far we have a large percentage of the radio equipment required, following up leads on Jumo 211 engines in various countries around the world and seeking prices for replacement engine cowlings, so we can convert her back to her original Heinkel He 111H specification!

During the Winter of 2019 to Spring 2020, the Museum restored the CASA 2.111.B to the specifications of a Heinkel He 111H-2 bomber, in the livery of A1+DA from Stab Kampfgeschwader 53 which was shot down on 15 September 1940 - now commemorated as Battle of Britain Day - over East London. In the UK, there are only two examples of a Heinkel He III and A1+DA being the only bomber variant.

More information about its past was revealed when the paintwork was removed from the leading edge of the port wing stub, when German style battle damage repair to a bullet hole was discovered, confirming that it had flown with the Luftwaffe during WW2 and had seen combat.

It was during the ensuing dogfight that Heinkel He 111H-2 Werke No. 3140 (coded A1+DA) of Stab Kampfgeschwader 53 was shot down by British fighters at 14:50 hours on Sunday 15th September 1940 whilst on a bombing raid to attack the Becton Gas Works, in East London. Shortly after releasing its twelve bombs, which dropped near the Becton Gas Works, it is believed to have been intercepted and shot down by Sgt Bohumír Fürst of 310 (Czechoslovak) Squadron but was also possibly attacked by F/O Blair D. Russell of No. 1 (RCAF) Squadron.

Some of the wreckage of this aircraft lay undisturbed until 1986 when the Arsenal was being developed to form part of the new Thamesmead Estate. Items including two MG 15 machine-guns, sections of armour plate, main undercarriage leg and tyre, large section of the gondolier, coins etc where unearthed and are on show in the museum.